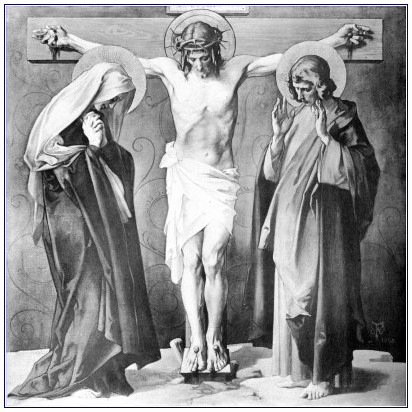 As Jesus hangs from the Cross, his body weak from the night being tried by the Sanhedrin and Herod before being flogged by Pilate and sent to carry his Cross to Golgotha, he is naked and alone. Thieves on either side, Roman soldiers standing guard, he has none of his disciples to comfort him in his last hours of earthly life. Only two are there close to him.

His mother Mary is there with the youngest apostle, John the baby brother of James who are the sons of Zebedee. Mary knew more than anyone on Mount Calvary that this crucifixion was the execution of an innocent man. How her mother’s heart must have ached as she saw her son mistreated, whipped and finally hung upon the Cross to die slowly in the cruellest public death imaginable. Yet she has joy even at this darkest hour. She chooses to share in Jesus’ suffering, standing at the foot of the Cross. St. Ambrose writes, “I read of her standing, but not of her weeping.” Yes, she grieves, but it is a fruitful and mysteriously joyful grief.

John was there perhaps because in his youth he did not recognize the danger of being associated with Jesus as the other and older Apostles did. Perhaps he clung to Jesus’ mother for strength. His relationship with Jesus was special, for he is the disciple whom Jesus loved. When he wrote his personal record of Jesus’ ministry, he made sure to include this story of his last encounter with his rabbi, still giving lessons even as his life was slipping away.

John saw intimately the nature of Jesus’ death. Yes, Jesus suffered as he died, but his suffering was a sacrifice willingly made to save us from the fires of Hell. He held out his arm for the Roman soldier to drive the nail through his wrist. Then the other arm. Then his feet. As the prophet Isaiah had written centuries before, “he was wounded for our transgressions, … he was oppressed and he was afflicted, yet he opened not his mouth.” As he hung from the Cross, Jesus reminded everyone that meekness is not weakness but true strength.

Woman, Jesus called his mother. Jesus, who had cried out to his Father as Abba – which means Daddy – speaks in the midst of horrific pain to his Mommy as “woman.” Why “woman?” Woman is the name Adam gave Eve. Bone of my bone, and flesh of my flesh, Adam said. One suitable to Adam and his universal call to holiness. Mary is the new Eve – a woman born without sin but able to say “Yes” to God where the first Eve was not able to say “No” to the serpent in the Garden of Eden. As the first Eve was leaving the Garden, she heard God tell the Serpent he would put enmity between him and the woman. There would be, as St. Alphonsus wrote, two families: the seed of Satan – a corrupted family – and the seed of Mary – the holy family whose head is Jesus Christ.

Mary is woman because she is the first and greatest disciple of Jesus. She said “yes” as his disciple to being his mother. She said “yes” silently at his presentation when Simeon warned her heart would be pierced. As woman, she announced the start of Jesus’ public ministry at the wedding at Cana, where she crystallized for all the simple instruction for every disciple of Christ: “Do whatever He tells you.” She is the “woman” with child in the vision John will have on the island of Patmos, pursued by the dragon who strikes at her son’s heel. As woman, the helpmate to holiness for man, Mary is given a new mission: be woman to the Church, be the Church’s guide for holiness, for obedience, for meekness, for docility to the Holy Spirit. Be mother to the Church. Behold thy son.

John is son as we are sons and daughters – by adoption into the life of Christ. Jesus had no blood brothers, but everyone who answered his call – his invitation to do the will of his Heavenly Father – is his brother and sister. As John wrote in his own Gospel, “as many as received him, to them he gave power to become the sons of God.” By following all his commandments, we are invited to become members of the holy family, whose head is Jesus and whose mother is Our Lady.

We who are called out are “ekklesia.” Ekklesia in Greek is Church in English. John stands for us. Church, behold your mother. Church behold the model disciple. Church, listen to your mother when she speaks and follow the example she sets.