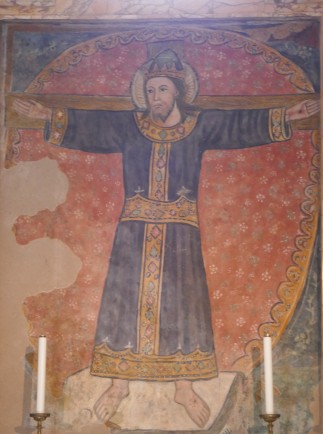 The Old Testament reading today from Malachi is short – it’s only two verses – but it really packs a punch, doesn’t it?

Lo, the day is coming when all the proud and all evildoers will be stubble. But for you who fear my name, there will arise the sun of justice with its healing rays.

And we cannot look to the Gospel for a message of sweetness and mercy, for from the mouth of Our Lord comes the promise of destruction, earthquakes, famine, false prophets, and persecution even unto death.

So, what should we think about having read these words of warning? I want us to think about what justice means and what death means. When we have the right understanding of justice and death, then we can better understand how to respond to the Scripture we read today.

Justice is a word we use often. We have a Justice Department in the government, and we have people fighting for social justice. Much of the time, the working definition of justice is “getting what’s coming to you.” When another driver zooms past us right through a stoplight and then we see that a policeman goes after him with the blue lights flashing, we think to ourselves, “Now that’s sweet justice.” Whenever there is a big oil spill, people will argue that a massive fine should be paid in the name of ecological justice. It’s a fairly simple equation that something bad happened, and somebody should be made to pay to balance the scales of justice.

That is not really the definition of justice that we use in the Christian church. Justice is defined as, “giving to God and others what is due.” Why does God come first? He comes first because Christians know that everything in existence came as a gift from God. As we say in the Creed as Mass, “he made Heaven and Earth.” If God gave us everything, then really everything should be returned to Him. That is his due. Just as it is true that any sin against another person is ultimately a sin against God, any injustice done to another person is ultimately an injustice done to God. We argue that the right to life is not only an issue between the mother and the child but ultimately an issue between God and Man because God gave life to Man and only God can rightfully take it back. That’s why our pro-life position is life from conception to natural death. There can be no true justice between human beings if there is no foundation of Godly justice. We cannot have justice if God is not in the picture.

If we can begin to understand the deep truth about justice, then we are better able to understand the deep truth about death. While the secular world understands death to mean the day we stop breathing, the Church understands death more deeply. Two weeks ago, we celebrated the Feast of All Saints and then the next day the Feast of All Souls. Why would we be celebrating those days if death means what the world thinks it means? It is because we know our glorified bodies will be reunited with our eternal souls on the Day of Judgment, the day when true death comes to the world and the sun of justice will arise with its healing rays on all the souls in Heaven and Purgatory and those still alive who have given their testimony by how they lived.

For Christians, earthly death is important because it is the fork in the road on the journey of our eternal souls. When we die, we will receive our particular judgment, and it’s a binary event, like flipping a coin. It’s heads or it’s tails. At our death, our eternal destination is set. We might spend some time on the way to Heaven in Purgatory, but our final position will be either with God for all eternity or without God for all eternity. And that will depend on the testimony we have given. It will depend on how we ordered our earthly lives.

Let’s take another look at the Gospel story. When the people hear Jesus predicting the destruction of the temple, they want to know when. And they want to know the warning signs, kind of like the two-minute warning in football. But that’s not the mindset Jesus wants us to have. When he taught us how to pray, he taught us to pray these words: “give us today our daily bread.” As disciples of Jesus, we should be focused only on today and on the day of judgment. Yesterday and tomorrow are not as important as today and the day of justice. The devil will tempt us to worry about the future or be regretful about the past, but we should resist and pray to God for what we need this day so that we can be with him on Judgment Day.

Jesus offers words of comfort to his followers even as he paints the picture of a pretty awful future. Wars and insurrections, powerful earthquakes, famines and plagues are awful, but for most of us they are remote. But everyone lives under a government of some sort, and the fear of being led in front of a government official is very real. We all know of people who were unfairly run through the court system. Jesus promised that sometimes they would persecute us because of his name. And we are seeing this happen in front of us in Australia with the prosecution of Cardinal Pell. A man of God was thrown in jail by a godless government because he is a man of God. What happens in Australia today could happen in America tomorrow. It is only because we understand what death really is and what justice is really about that we can remain peaceful in the face of injustice like this.

And that is our call. Father preached last week about the vocations of Holy Matrimony and Holy Orders, but all of us – religious, clergy, or secular laity – are called to holiness. It is the universal call.

So what does holiness look like in a world that misunderstands justice? Well, the readings today tell us clearly. We are to fear the Lord, as the prophet Malachi says. Fear of the Lord is piety, religious submission, and it is the beginning of wisdom according to the Bible. If we have proper fear of the Lord, then we won’t have fear of the world. Even as we hear of wars and insurrections, we do not need to fear because we know that at the Judgment Day the sun of Justice will arise with its healing rays. When nation rises against nation, we will be filled with the Holy Spirit. When we are led before kings and governors because of His name, we will not fear. We will give testimony, and we will trust the Lord to give us the words he wants them to hear. We will be unafraid because we do not fear earthly death. We only fear eternal death – eternal separation from the God who created us and loves us.