The King is Coming as an Infant 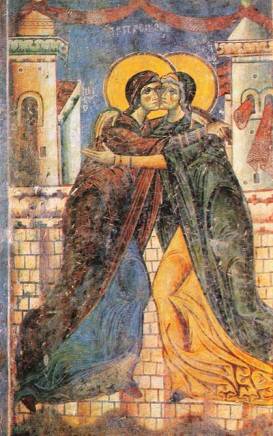 This is the fourth and last Sunday of the season of Advent. Advent is the season in the church year when we anticipate the coming of the King. The King is coming. We know he is coming in the flesh in just a few days, when he comes as a little baby born in a manger because there was no room at the inn. We know he is coming in all his glory at the end of time, when the world as we know it ceases to be, and he makes a new creation and gathers into his heavenly kingdom all who loved him. And we know he is coming each and every day in how we choose to live the days that he has given us.

At the beginning of time there was no need for God to send a king because we lived in harmony with our Creator in the garden, until we turned our backs on him and chose to listen to the advice of the tempter, the serpent. We had to leave the garden, but God did not leave us. He sent us judges, prophets, and earthly kings. He sent us messengers in the form of men and through visions and dreams. All his messages were the same: turn back from your wicked ways, oh child that I love.

And through the generations, we tried to turn back to him. But we never seemed to have the strength to sustain a constant relationship with the God who created us out of his own love. We did not understand that the sacrifices we offered at the temple were not on their own effective offerings to satisfy the debt of sins that we brought to the temple. What our Lord desired was a contrite heart and a spirit of joyful thanksgiving. Our great lawgiver, Moses, spoke directly to God. But we were too afraid. We dared not speak directly to the one who willed everything into existence and who will judge everything at the end of time.

So God sent us his prophets. They came again and again, always with the same message: repent and believe! Turn back, oh man, and change your ways! The salvation history recounted in the Old Testament is a regular cycle of us wandering away from God, and God sending someone to call us home. and us trying for a while but not being able to sustain the loving relationship for which we were made.

The Israelites thought that their kingdom would be an earthly kingdom, but that is not the kingdom of God. And so God allowed their earthly kingdom to be subdued, and the Israelites of old lived under the rule of foreigners and pagans. They lived under the Syrians, the Persians, the Greeks, and the Romans. God allowed them to come back and worship at the temple, but they were never again completely free of foreign rule.

Through his prophets, God told us that he would send his king, who would be a descendant of King David of the tribe of Judah in the town of Bethlehem. And that is why he allowed the Roman governor to order a census. Joseph of the lineage of David would have to go from his residence in Nazareth to the town of his heritage: Bethlehem. In order to participate in the census, Joseph and his family would have to be physically present. And so the prophecy of the prophet Micah did come to pass: “you Bethlehem, too small to be among the clans of Judah, from you shall come forth for me one who is to be ruler in Israel.”

The King comes as an infant so that we will dare to try and love him as he loves us. This is the King who will come in all his glory at the general judgment, but because we know him as an innocent baby, we can love him and trust him, and be with him at the end of time.

Four weeks ago, when the season of Advent started, Father preached on the meaning of the word, Advent. Advent means coming. The readings from the first half of the season of Advent reminded us that the King would come at the end of time in all his glory. The readings of this week and last week encouraged us to be joyful because of the coming of the King in his humanity at the incarnation.

Advent is a season of waiting for the coming of the King. Waiting and coming are both what are grammar teachers called gerunds. These are the “ing”-form of a verb, and they are inclusive of the past, the present, in the future. Waiting, which is what we do in this season of Advent, means we have waited (which is in the past), and now we wait (which is in the present), and in the future moment we will wait. It is in these gerunds that we can experience in a very limited way some sense of eternity. It incorporates past, present, and future, which is another way to describe something eternal.

In Advent we are waiting for the coming of the King. We know in just a few days he will come in the human person of Jesus of Nazareth, born in Bethlehem. We know that at the end of time he will come at the second coming to render judgment on the world. And he is coming in how we live our lives. We call ourselves Christians, and our behavior is both our witness to the world, and our commitment to our king.

As we prepare for the incarnation, let us recommit to the coming of the kingdom of God in our lives.

As Christians, we are praying. We pray constantly, as St. Paul told us to do. Our praying is our intimate relationship with God, knowing he is loving us, and we are loving him back.

As Christians, we are believing. We believe things that the world refuses to believe because we trust in the word of God rather than merely in those things that we can hear and touch and see and smell and taste.

The King is coming. May we be receiving him always.

This entry was posted in homiletics and tagged Advent, YearC. Bookmark the permalink.